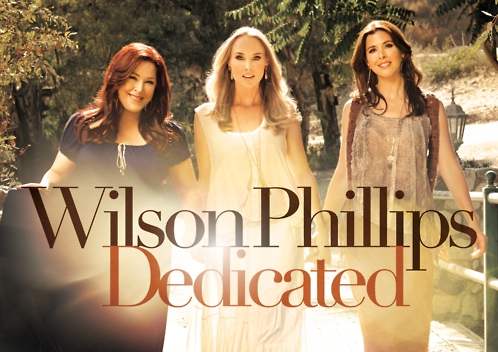 In celebration of their 20th year as recording artists, Wilson Phillips releases Dedicated, the album that the groundbreaking female vocal trio was always destined to make. The 11-song set is out today on Sony Masterworks and is the long-anticipated tribute to the legendary groups – The Beach Boys and Mamas & The Papas. Dedicated is streaming in full on AOL Music and the MSN Listening Booth.

To celebrate the release of Dedicated, Lohemann’s will be hosting a special Wilson Phillips in-store performance and CD signing at their Chelsea location in New York on Thursday, April 5th from 5-7pm on 7th Avenue at 16th street.

The lifelong friends will also star in Wilson Phillips: Still Holding On, a reality show documenting the group’s adventures in and out of the recording studio. The show debuts on Sunday, April 8th, 2012 on the TV Guide Network.

The collection of classics on Dedicated is made up entirely of songs by Brian Wilson’s Beach Boys, father of Wendy and Carnie Wilson; and of John and Michelle Phillips’ Mamas & The Papas, parents of Chynna Phillips. As the title indicates, it includes the iconic track “Dedicated To The One I Love”, the latter group’s 1967 hit, along with other Mamas & The Papas landmark singles like “California Dreamin'”, “Monday Monday”, “Twelve-Thirty” and “Got A Feeling.” From The Beach Boys catalog are equally artful Wilson Phillips interpretations of “Wouldn’t It Be Nice”, “God Only Knows”, “Don’t Worry Baby”, “In My Room” and “Good Vibrations.”

Dedicated was produced by Carnie’s husband Rob Bonfiglio, with reverence for the original recordings, but from a contemporary standpoint. “The basic arrangements and rhythms are really true,” says Carnie, “but vocally we’ve added some new twists and tag endings. Specifically on The Beach Boys songs, which were all male voices, it’s really cool that they’re coming from women: Chynna’s vocal on Don’t Worry Baby, and Wendy’s on Wouldn’t It Be Nice, are really sweet and endearing, and work beautifully. On Good Vibrations, we did all this stuff a cappella! Even the instrumental parts, like emulating the theremin, which I did.”