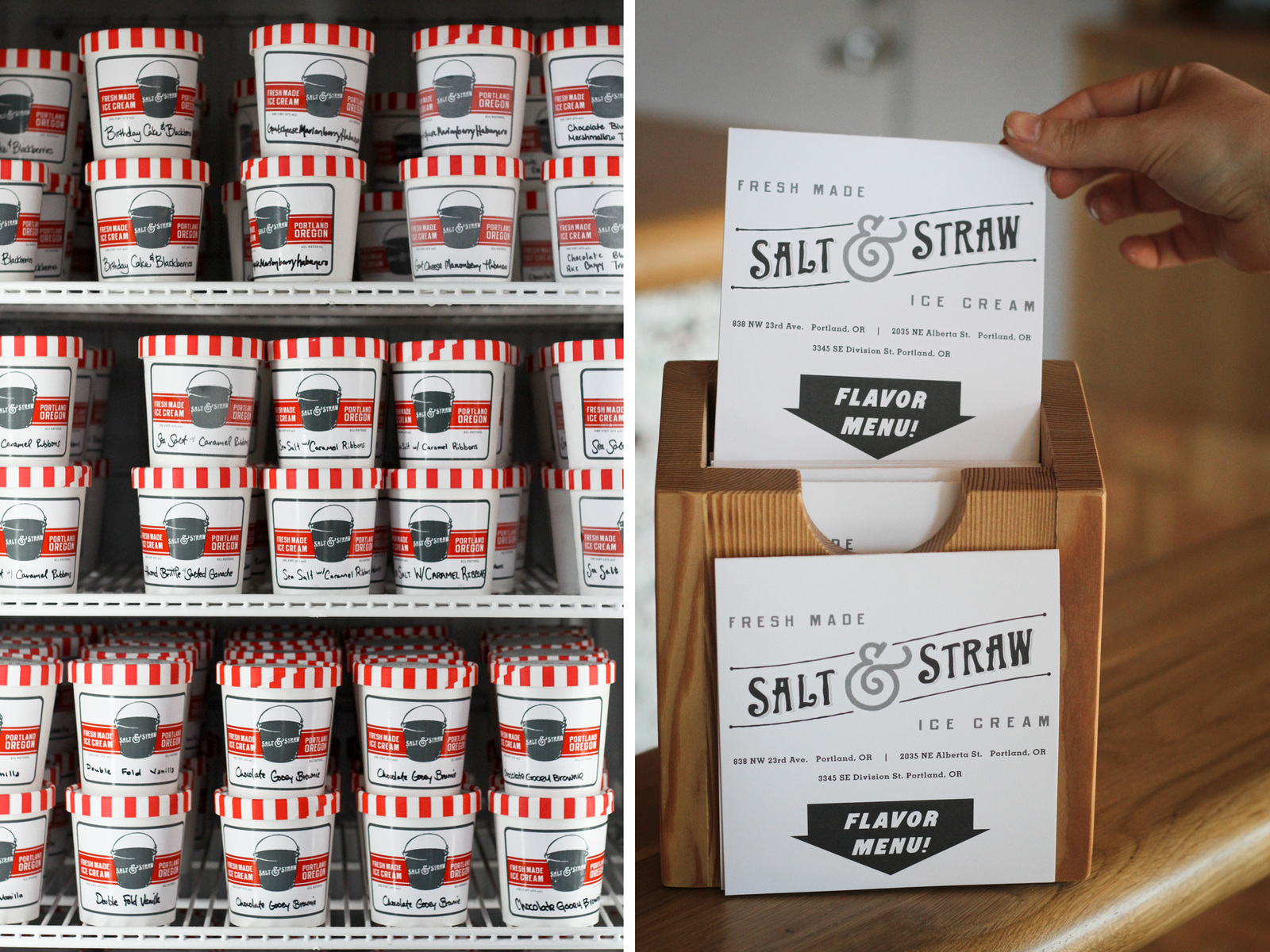 Salt & Straw’s new June menu provides a street food inspired culinary tour through ice cream. To put together the flavors, head ice cream chef Tyler Malek and his team hit the streets in Portland and LA to find inspiration from local food carts and street food chefs. Flavors will be available for national shipping and at Salt & Straw locations in Portland and Los Angeles June 5, 2015 – July 2, 2015.

In Portland, some of the food carts put a twist on familial inspiration, like Nong’s Khao Man Gai and Viking Soul Food, while others find inspiration in the constraints of highlighting a single ingredient, like Potato Champion. With collaborative support from each chef, who puts all of their heart behind their cooking, serving every day in the rain, sun, snow and wind, they’ve created a menu of flavors that celebrate the ingredients and recipes that make Portland’s food scene truly unique.

In Los Angeles, the inspiration of working with Roy Choi led them to some of the nationally-acclaimed greats like Kogi BBQ food trucks; but they also discovered some of the less obvious, obscure greats like Restaurante Guelaguetza. With collaborative support from chefs that have integrated their identity into authentic, family recipes, this ice cream menu celebrates the ingredients and recipes that make Los Angeles’ food scene truly unique.

Portland Menu
Nong’s Khao Man Gai Peanut Butter
Nong Poonsukwattana started serving amazing Thai food in her tiny Downtown Portland food cart in 2009. Looking for the best way to utilize the small space, Nong decided to serve one dish, her childhood favorite dish, a seemingly simple yet technically formidable dish, Chicken and rice. Now, Nong has built her “chicken and rice empire” into two carts, one brick and mortar, and a retail line of khao man gai sauce. It was an honor to work with Nong on this ice cream. As an ode to her menu, we kept things simple by gently cooking her world famous Thai peanut sauce into a coconut based ice cream, mixing it with a bit of chocolate and other sweets, and churning it into this ice cream.

Potato Champion’s Poutine
Potatoes and ice cream. Ice cream and potatoes. A match made in starchy, creamy heaven. Having opened his first cart on SE Hawthorne in 2008, Mike McKinnon of Potato Champion has been one of the leaders in the Food Cart movement in Portland. Basically everything is served on french fries at this food cart which, to us, means all delicious all the time. The ice cream we created together is a french fry ice cream (think “dipping fries in frostys” style of deliciousness), with gravy and cheese curds! We basically re-purposed Mike’s beef gravy to make for a “caramel-like” sauce to get that yummy gooey topping. Then, we made these little puffs of cheese curd flavored marshmallows to mimic the warmed curds on top of Potato Champion’s signature Poutine.

Wolf & Bear’s Tahini and Cardamom
Wolf & Bear’s have been slaying the food scene out of their ham-can camper kitchens. Intelligently yummy, ingredient-driven vegetarian dishes showcase a simple set of Israeli flavors like fresh mint, cilantro, grilled eggplant and roasted red pepper; making the ingredients sing together with simple chords and catchy rifts like a Portland “almost metal” band. For more than six years, they’ve built a mini empire of food carts all around Portland, consistently delivering amazing food. Together with Tanna and Jeremy’s bright collection of inspiration, we made a secret tahini-cardamom blended ice cream flavor featuring Middle Eastern flare!

Koi Fusion’s Kimchi & Rice
Bo Kwon of Koi Fusion grew up a self-proclaimed “closet-kimchi-lover.” His fermented heritage was banned from dorm rooms and sneered at by friends up until he and a few friends, like Roy Choi, changed the culinary world’s perspective of Korean food. About six years ago, Bo became one of the pivotal Korean chefs in the country opening his first food cart in 2009; effectively re-packaging kimchi into relatable formats (i.e tacos) and re-branding kimchi as a spicy, sexy, delicacy. Today, Bo’s crazy pop food cart has grown to seven trucks and trailers and two shops all around Portland. With the help of Bo, we altered the form of kimchi for this ice cream by making “chocolate covered kimchi” as well as a kimchi caramel sauce! The base is simply and elegantly flavored with jasmine rice. As a nod to Bo’s constant fusion, this is a bit of ice cream + korean fusion of our own.

Los Angeles Menu
Papi’s Beijing Boiled Salted Nuts
Having started Kogi Korean BBQ in 2008 in LA, Roy Choi takes the angst and egotistical pomposity from cooking and, instead, cooks inventive dishes percolating with “don’t give a shit deliciousness.” Roy started out of his food truck in Venice, serving a crazy delicious fusion of unique Korean ingredients and taco hand food feeling. When creating an ice cream flavor together, we wanted to take a classic from his childhood, Beijing Salted Peanuts, and add a heady spin of SE Asian spices in the form of a nostalgically-sweet treat, the Fluffernutter.

La Guelaguetza’s Black Mole
When it comes to Oaxacan food in the United States, Restaurante Guelaguetza, run by Bricia, Fernando and the Lopez family in LA, is one of the absolute best. It’s difficult to explain how good their food is a perfect blend of Oaxacan tradition with chef-driven creativity. That being said, the true star at La Guelaguetza are their moles. A seamless combination of over 50 ingredients, each individually prepared in order to blend into one, singular, delicious paste. La Guelaguetza’s moles don’t spike with specific flavors nor are the ingredients particularly easy to pin down, rather each mole creates an entirely new flavor that can hardly be described with words. This ice cream is a sweet incarnation of La Guelaguetza’s mole. The mole paste was made by the team at Restaurante Guelaguetza and our ice cream is purely a vehicle to showcase this amazing delicacy.

About Salt & Straw Ice Cream
Salt & Straw Ice Cream is a chef-driven ice cream kitchen with scoop shops in Portland and Los Angeles that partners with local artisans, producers and farmers to serve unusually creative and absolutely delicious ice cream. Each ice cream is handmade in small batches using only all natural cream from local farms in each city. Flavors showcase the best local, organic and sustainable ingredients from Oregon and Southern California farmers and artisans as well as imported flavors from small hand-picked farms from around the world. The company started in Portland, OR serving eight flavors from an ice cream cart in May of 2011 and now has three scoop shops in Portland and one in LA. Scoops of hand-made, small batch ice creams, sundaes, milkshakes and floats as well as pints to go are available at each with an ice cream sommelier of sorts who will gladly take you though a tasting of all the flavors. Favorites, seasonal, design your own variety packs and pint club memberships are available for online purchase and can be shipped anywhere in the United States. Salt & Straw’s ice cream cart is available for catering parties and events.
Contact: