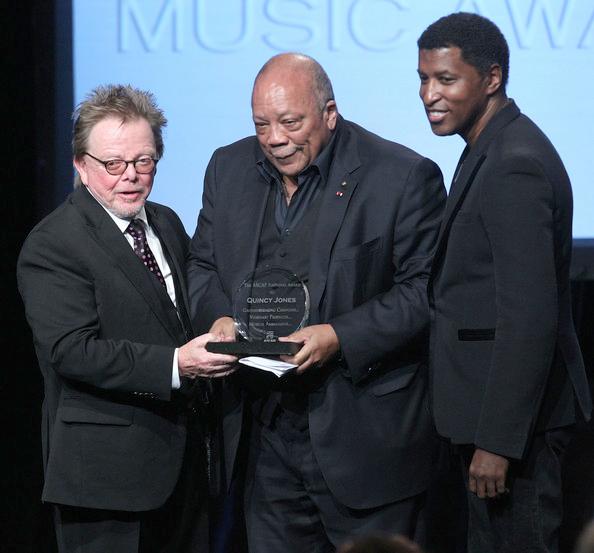 We are excited to announce, The American Society of Composers, Authors and Publishers (ASCAP) hosted its 25th Annual Rhythm & Soul Music Awards tonight at the Beverly Hilton Hotel in Los Angeles, CA. The star-studded event, which was attended by hundreds of songwriters, recording artists and music industry leaders, paid special tribute to Quincy Jones and Pharrell Williams, and honored the songwriters and publishers of the most performed ASCAP songs on the 2011 R&B/Hip-Hop, Rap and Gospel charts.

The invitation-only event was sponsored by Rolling Out, an information source for for urban lifestyle, breaking news and original stories. Rolling Out Publisher and Steed Media Group CEO Munson Steed led the room in a toast at the top of the ceremony to help celebrate the history of the Rhythm & Soul Awards and congratulate the evening’s winners and honorees.

Top awards were handed out to:

One of the evening’s highlights was a special tribute to legendary music creator Quincy Jones, who was honored with ASCAP’s Founders Award in recognition of his achievements as a producer, composer, entrepreneur and icon. To celebrate the legendary music mogul, Musical Director Michael Beardon led a tribute performance featuring Marsha Ambrosius and Tyrese, and surprise guest Kenneth “Babyface” Edmonds shared some personal remarks and co-presented the award with ASCAP President and Chairman Paul Williams.

The ASCAP Founders Award is among the most prestigious honors that ASCAP gives to songwriters and composers who have made pioneering contributions to music by inspiring and influencing their fellow music creators. Past recipients include Sean “Diddy” Combs, Dr. Dre, Stevie Wonder, Smokey Robinson, Ashford & Simpson, and Berry Gordy Jr. & Motown Industries.

The Songwriter of the Year award was presented to Canadian producer Noah “40″ Shebib, who penned four of the most performed songs of the past year. 40 was honored for “Fall for Your Type” (by Jamie Foxx featuring Drake), “Headlines” (by Drake), “I’m On One” (by DJ Khaled featuring Drake, Rick Ross and Lil Wayne) and “Marvin’s Room” (by Drake).

ASCAP Publisher of the Year honors went to EMI Music Publishing, which was honored for 18 award-winning songs. This is the 18th consecutive win for EMI and the 20th time in the 25-year history of the awards show that they have received this honor. ASCAP CEO John A. LoFrumento and ASCAP Vice President of Membership, Rhythm & Soul Nicole George presented the award to EMI’s President of North American Creative Jon Platt and his creative team.

Established in 1914, ASCAP is the first and leading U.S. Performing Rights Organization (PRO) representing the world’s largest repertory totaling over 8.5 million copyrighted musical works of every style and genre from more than 435,000 songwriter, composer and music publisher members. ASCAP has representation arrangements with similar foreign organizations so that the ASCAP repertory is represented in nearly every country around the world where copyright law exists. ASCAP protects the rights of its members and foreign affiliates by licensing the public performances of their copyrighted works and distributing royalties based upon surveyed performances. ASCAP is the only American PRO owned and governed by its writer and publisher members. For more information, please visit www.ascap.com.