This fall the Academy of Motion Picture Arts and Sciences will present the final showing of the groundbreaking multimedia exhibition Hollywood Costume in the historic Wilshire May Company building, the future location of the Academy Museum of Motion Pictures, at Wilshire Boulevard and Fairfax Avenue in Los Angeles. Organized by the Victoria and Albert Museum, London (V&A), this ticketed exhibition explores the central role of costume design – from the glamorous to the very subtle – as an essential tool of cinematic storytelling.

The Academy is enhancing the V&A’s exhibition and will include more than 145 costumes from over 60 lenders. The Academy’s presentation will add more than 30 costumes to this landmark show, including Jared Leto’s costume from Dallas Buyers Club (Kurt and Burt, 2013) – a recent acquisition to the Academy’s collection – as well as costumes from such recent releases as The Hunger Games (Judianna Makovsky, 2012), Django Unchained (Sharen Davis, 2012), Lee Daniels’ The Butler (RuthE. Carter, 2013), American Hustle (Michael Wilkinson, 2013) and The Great Gatsby (Catherine Martin, 2013). In addition, Hollywood Costume will showcase the Academy’s pair of the most famous shoes in the world – the original ruby slippers from The Wizard of Oz (Adrian, 1939) shown with Dorothy’s blue and white gingham pinafore dress.

“We are thrilled to bring this innovative exhibition to Los Angeles,” said Cheryl Boone Isaacs, Academy President. “Hollywood Costume invites visitors to see some of the most well-known costumes from their favorite movies and to explore the impact designers have in creating our most beloved characters.”

Upending the conventions of what is considered “costume,” Hollywood Costume reveals what is hidden in plain sight: that films are about people, and the art of the costume designer helps create their characters. On view October 2, 2014, through March 2, 2015, the exhibition brings together iconic costumes from Hollywood’s Golden Age, including costumes for Marlene Dietrich from Morocco (1930) and Angel (1937) designed by Travis Banton, and from modern classics such as Mary Poppins (Tony Walton, 1964), Raiders of the Lost Ark (Deborah Nadoolman, 1981) and Titanic (Deborah L. Scott, 1997).

“Cinematic icons are born when the audience falls deeply in love with the people in the story. And that’s what movies and costume design are all about,” notes Landis.

The exhibition is the culmination of a five-year effort to source, identify and secure objects from all over the world. The collectors who have loaned to the exhibition include major motion picture studios, costume houses, actors, public museums and archives, and private individuals.

EXHIBITION STRUCTURE
This innovative exhibition takes visitors on a non-chronological, four-gallery journey that tells the story of costume design from early Charlie Chaplin (The Tramp, 1912) to Man of Steel (James Acheson and Michael Wilkinson, 2013). Hollywood Costume includes montages, animation, film clips, and projections, supported by a specially commissioned score written by British composer Julian Scott. The clothes are exhibited alongside quotes and interviews with costume designers, directors, and actors discussing the role that costume plays in creating the characters on screen.

Act Two: Dialogue examines the creative collaboration among great filmmakers, actors and costume designers. Using archival film footage as well as specially commissioned interviews, Dialogue explores five key director/designer pairings: Alfred Hitchcock and Edith Head, who worked together on 11 films including The Birds (1963); Tim Burton and Colleen Atwood, whose films together have spanned from Edward Scissorhands (1990) to Dark Shadows (2012); Martin Scorsese and Sandy Powell, who have teamed on films from Gangs of New York (2002) to The Wolf of Wall Street (2013); and Mike Nichols and Ann Roth, who have worked together for over 20 years on films from Silkwood (1983) to Closer (2004). The Academy’s presentation of Hollywood Costume features a new interview with writer-director Quentin Tarantino and costume designer Sharen Davis, who collaborated on Django Unchained (2012). This section also explores how costume designers have worked within the rapidly changing social and technological landscape of the last century: from silent to sound, from black and white to Technicolor, and from the studio system of Hollywood’s Golden Age to multi-national corporations and art house “indies.” Censorship, remakes and genre will be deconstructed in a section devoted to historic and social context. It will show how costume designers have embraced the innovations in technology and animation, such as Joanna Johnston’s design for the animated character Jessica Rabbit in Who Framed Roger Rabbit (1988), and the designs integrating motion-capture (“mo-cap”), exemplified by characters from Avatar (Mayes C. Rubio, Deborah L. Scott, 2009).

CREDIT
Hollywood Costume is organized by the Victoria and Albert Museum, London.

Swarovski is the presenting sponsor of Hollywood Costume. The crystal house has provided the all-important sparkle to Hollywood’s wardrobes since the 1930s, when Swarovski crystals began to light up the silver screen in classic films like Gone with the Wind, Gentlemen Prefer Blondes and Breakfast at Tiffany’s. In recent years, Swarovski has worked closely with talents in costume and set design on blockbusters including Black Swan, Skyfall and The Great Gatsby, and its crystals have been the key creative ingredient in the dazzling set design for the Academy Awards since 2007.

“Swarovski’s history of working with costume, jewelry and set designers on some of Hollywood’s most iconic productions goes back 75 years to when Dorothy first tapped her Swarovski-encrusted ruby slippers,” said Nadja Swarovski, member of the Swarovski Executive Board, “so we’re thrilled to support this landmark exhibition at its new home in Los Angeles.”

Additional support is provided by Pirelli.

PARKING
Parking is $12 and available in the Pritzker Parking Garage on Sixth Street, just east of Fairfax Avenue, and on the corner of Wilshire Boulevard at Spaulding Avenue. Additional parking is available in the Petersen Automotive Museum parking lot located on the corner of Wilshire Boulevard and Fairfax Avenue, the Museum Square parking lot on Curson Avenue, and at meters located on 6th Street. The Wilshire May Company building is easily accessible via public transportation. Visit Metro.net for details. 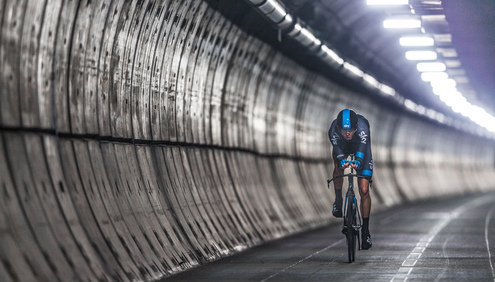 Tour de France 2013 winner Chris Froome is the first person to cycle from the United Kingdom to France, under the sea. As the world’s...