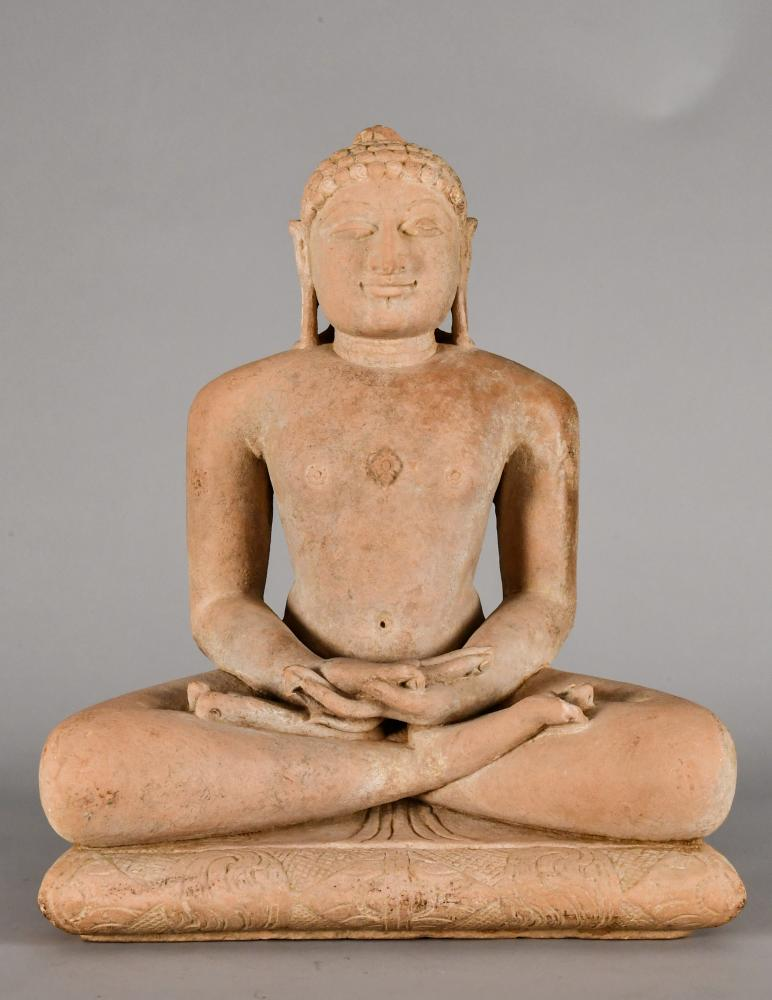 This elegant yet tranquil stone figure depicting a jina, possibly Rishabhanatha (the traces of long flowing hair) or Mahavira (circa 480-408 BCE), is a superlative example of 11th century Jain sculpture. Sensuously modeled, the broad shoulders, short neck and narrow waist of the seated jina demonstrate the powerful the meditative equipoise of the subject. Also note the fine carving and rendering of the iconographical details, including the delicately incised individual curls; the tufted whorls at the nipples; the stylized srivatsa at the center of the chest; and the foliate motif at the palms of the hands and soles of the feet. This foliate motif is continued at the base cushion, which also depicts a playful leogryph at center.

Jain figures depicting jinas are typically recognizable by their attributes or identifying characteristics. It is possible that the current work depicts Mahavira, the twenty-fourth and last tirthankara, due to the lack of identifying features and as he is the most commonly depicted.

Every inch of this masterwork establishes its level of excellence, the hem of his lower garment extending between his ankles, his flexed toes rest above his calves while the line of his tibias course the length of his lower legs, his hands rest in the attitude of meditation below his exquisitely modelled ample stomach, his rib cage rises in iconometrically prescribed diagonals towards his broad chest with the shrivatsa mark between his smooth pectorals, his arms extend from broad shoulders, his neck displays the trivali mark, flanked by the characteristic cubed ends of his pendulous earlobes, his charming face with a pronounced chin and rounded cheeks either side of an abstracted nose rising to high arched eyebrows and elegant almond shaped eyes, his hair in tight curls forming a series of raised nodules enfolding the low ushnisha and a sigmoid hairline.

Compare the rounded, carved base cushion the current work with a contemporaneous marble sculpture of a Jain Svetambara Tirthankara in meditation, in the Metropolitan Museum of Art, acc. no. 1992.131; and a 12th Century polished sandstone sculpture of a Jina in the collection of Dr. David R. Nalin, see Pratapaditya Pal, Peaceful Liberators: Jain Art from India, Los Angeles, 1994, p. 140, cat. no. 27.

As Key Chapple notes with reference to a similar, later example in the Virginia Museum of Fine Arts, the ornate cushion on which he is seated emphasizes both his status as a revered being as well as his ability to flourish even after surrendering all attachments (Diamond (ed.), Yoga: The Art of Transformation, Washington, DC, 2013, pp. 132-5). He sits in meditation wherein no violence can be envisaged, and meditating on him in turn diverts the spirit away from earthly desire and affliction and towards the transcendent (van Alphen, Steps to Liberation, Antwerp, 2000, p.43).

Jainism flourished in Western India between the 10th and 12th centuries, with many temples commissioned under the Solanki and Later Pratihara dynasties. The apex of craftsmanship is embodied in the Dilwara temples on Mount Abu itself. Judging from the piece’s size and quality, it would likely have served as central devotional image of a smaller temple, or an icon housed in a shrine on the outer perimeter of a larger temple.

Stylistically, this sculpture bears close resemblance in almost all respects to a Jina attributed to the second half of the 12th century found in Gujarat and now held in the British Museum (OA 1915.5-15.1), but the chubbier face and the more naturalistic treatment of the hips and waistline on the present lot suggest a slightly earlier date of production. The archaeological record seems to show a general movement towards greater abstraction in the 12th century. This trend can be observed by contrasting two standing Jinas from Ladol, Gujarat now in the Lalbhai Dalpatbhai Museum, Ahmedabad: one an 11th century figure of Parshvanath (#222), and the other, a figure of Shantinath, dated to 1269 CE (#218, see ibid., pp. 30-1). The former’s sigmoid hairline, round face, ushnisha, earlobes, and waist also compare closely with the present sculpture. This development is similarly present when contrasting a Jina attributed to the second half of the 11th century in the Metropolitan Museum of Art (1992.131) with the aforementioned example in the Virginia Museum of Arts (2000.98), dated to 1160 CE.

Furthermore, his softly-featured, plump face parallels the attractive modelling on at least two Hindu marble sculptures from 11th century Sirohi: one of Brahmani held in the Albert Hall Museum, Jaipur (CMJ 33/65, see Ahuja, The Body in Indian Art and Thought, Brussels, 2013, no. 149, p. 131) and another, likely of Sarasvati, in the William Price Collection held in the Amarillo Museum of Art (see N. Rao, Boundaries & Transformations, Texas, 1998, fig. 17, p. 22), as well as a Vidyadevi of unknown provenance in the Cleveland Museum of Art (1972.152). Sirohi sculptures are arguably the most attractive type of the style and period. With his sweet expression and uplifting face, the present work is perhaps the most endearing of its kind.

In the Jain religion, there are 24 Jinas, or perfect beings, who fill a role comparable to that of the Bodhisattva of Buddhism, guiding devoted believers on the path to liberation from the reincarnation cycle. Some speculate that the mark appearing on the chest of Jina sculptures is meant to distinguish them from Buddhas. Depictions of Jinas always show them in one of two positions: seated in meditation, like this sandstone version, or standing in kayotsarga, a stance that is unique to the Jain religion and represents the state of body abandonment. 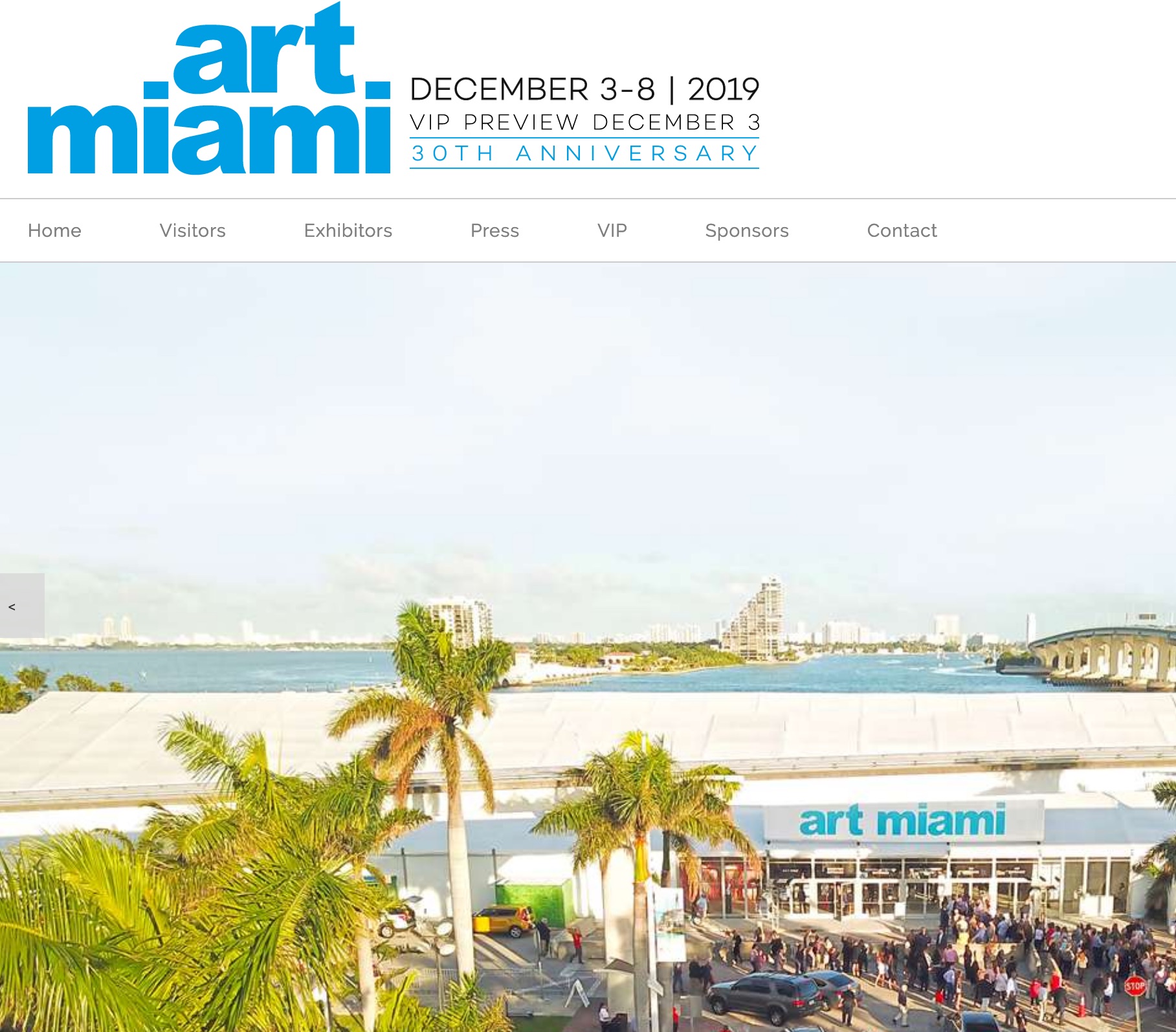 Art Miami (http://www.artmiami.com), returning for its 30th edition on December 3 – 8, 2019, has announced its 2019 exhibitor list. Recognized as one of the preeminent international modern and contemporary art fairs, Art Miami will showcase an array of iconic and important art works, dynamic projects and special installations from more than 170 international galleries from nearly 22 countries representing 69 cities.

This year’s fair will kick off with a Platinum VIP Preview for top collectors, curators, and members of the press on Tuesday, December 3rd, from 4:30PM – 6:00PM to benefit the Pérez Art Museum Miami (PAMM). The VIP Preview will open for all VIP Cardholders at 6:00PM and continue until 10PM. This is the tenth consecutive year that PAMM has been the fair’s exclusive VIP Preview benefactor and Art Miami has already donated more than $200,000 to further the museum’s collection and mission. The partnership remains an integral part of Art Miami’s larger commitment to the city of Miami.

Art Miami is the top ranked international art fair for attendance in the U.S. and second most attended globally, visited annually by established and budding collectors, curators, museum professionals, members of the press and art world luminaries. For the third year, the fair will be held at the prestigious waterfront location of One Miami Herald Plaza on Biscayne Bay nestled between the Venetian and MacArthur Causeways in the heart of Downtown Miami. Art Miami offers an unparalleled level of accessibility to the activities and collectors on Miami Beach.

The 2019 line-up will present the finest investment quality paintings, photography, prints, drawings, design, sculpture and video art, with works from the 20th and 21st centuries. The fair will feature leading international galleries showcasing renowned modern masters and blue-chip contemporary works, as well as the most sought-after living artists from around the world.