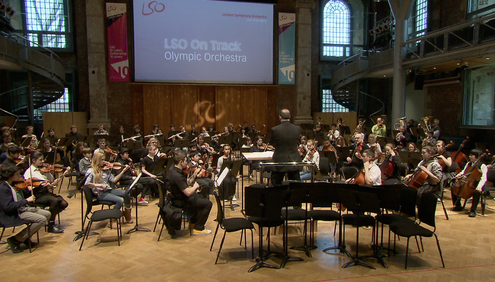 Friday 22nd March: 80 young musicians aged 7-18 from East London last night joined forces with LSO players to recreate their iconic performance at the London 2012 Games.The performance celebrates 10 years of LSO St Luke’s, the LSO’s music education and community entre which has served the community of East London and beyond for the past decade, reaching some 60,000 people annually.

On Friday 27 July 2012, the London Symphony Orchestra was proud to play at the Opening Ceremony of the London 2012 Olympic Games. Eighty young LSO On Track musicians from East London aged 7–17, performed an arrangement of Elgar’s Nimrod by Gareth Glyn, followed by And I Will Kiss, a new piece by Rick Smith, Music Director of the Opening Ceremony.

The young people who performed are part of LSO On Track, which aims to provide instrumental learning opportunities to young people across East London regardless background. Many of the participants joined the scheme four years ago as complete beginners. They have been coached by LSO players to develop and improve their skills and focus. The LSO also provides outstanding performance opportunities for them alongside LSO musicians.

In March 2013, LSO St Luke’s celebrates ten years since its miraculous transformation from former church to thriving music education and performance hub, with community at its heart.

The LSO is set apart from other international orchestras by the depth of its commitment to music education, reaching over 60,000 people each year. The award-winning programme, now in its 21st year, enables the LSO to offer people of all ages, from babies through music students to adults, an opportunity to get involved in music-making and to enter the extraordinary soundworld of the Orchestra.