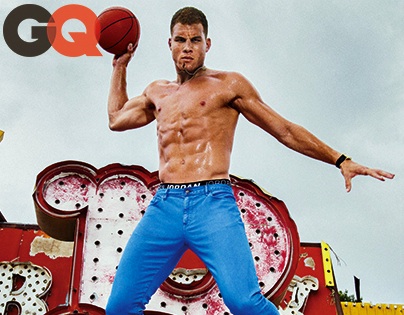 “It was unfortunate. I mean, for me, like I said, the first thing I ever Googled about the man, the first thing that popped up was ‘racist.’ So I was aware. I hate to say this, and it might sound ignorant, but I wasn’t surprised that all this came up,” NBA star Blake Griffin tells GQ’s Zach Baron of the Donald Sterling tape that came out earlier this year. “I was one of the guys who didn’t want to do anything,” he says of the team’s decision to turn their warm-ups inside out. “I didn’t want to give this one incident the power that it doesn’t deserve.”

“I can’t say today I have it down completely,” Griffin tells GQ of dating. “People just think about L.A. and they think, ‘Oh, there’s so many beautiful women out here,’ and things of that nature. But it is so hard to find just like a decent, like straight, you know, across-the-line, just like good girl out here.” Despite the Clippers recent success, Griffin admits Los Angeles is a Lakers town and says, “nothing we can ever do will ever take away from their history.”

It’s no surprise that Griffin, who punches up scripts on the side (for Chappelle Show co-creator Neal Brennan), alludes to plans beyond the NBA. “I think once I’m done, I’ll be done,” he says. “I don’t have like a clear-cut plan, but I’m 90 percent sure that I won’t be involved in basketball. I’ll obviously be supportive and help out there, but I don’t want to stay in the NBA world or anything like that.”

Despite his recent public support of creationism, Griffin counsels on religious tolerance. “I hate when I see Christians, or whatever religion it is, protesting gays and having signs that say, like, ‘God hates gays,’ ” he says. “How could He be mad at somebody for liking the same sex? I don’t get it. And it also makes me mad, because as a religious person, it makes you look bad.”

Griffin’s October cover story is featured in the magazine’s first-ever “Age Issue,” celebrating GQ’s lifelong commitment to looking awesome at any age. The issue stars Griffin alongside Chadwick Boseman, Norman Reedus, Clive Owen, and Tom Selleck. GQ surveyed the five modern gentlemen about getting old, staying young, looking sharp, and living well— whether you’re 25 or 75. The October issue of GQ will be available on newsstands in New York and L.A. on September 23 and nationally September 30.

In this article:BLAKE GRIFFIN, GQ, NBA