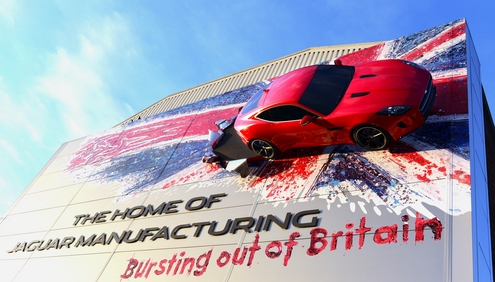 It is one of the most important awards for British businesses.  The official award notification to Jaguar Land Rover reads: “Her Majesty The Queen has been graciously pleased to approve the Prime Minister’s recommendation that your business should receive a Queen’s Award for Enterprise in International Trade, this year.”

Exports account for 80% of all vehicles Jaguar Land Rover produces at its three UK manufacturing plants.  In 2013, the company sold 425,006 vehicles, up 19% on the previous year. Jaguar Land Rover’s largest export regions are mainland Europe, North America and China, together accounting for 60% of all export sales.

This is the first Queen’s Award won by Jaguar Land Rover as a single company, but each of the brands has won six times in the past between 1967 and 2008.

In total, Jaguar Land Rover received over 200 international awards during 2013, for its products, its people and its business practices. It is also the only automotive company to hold all three Royal Warrants, as a supplier of goods and services to the households of HM The Queen, HRH The Duke of Edinburgh and HRH The Prince of Wales.

In this article:Her Majesty The Queen’s birthday, Jaguar Land Rover, Prime Minister’, The Duke of Edinburgh and HRH The Prince of Wales