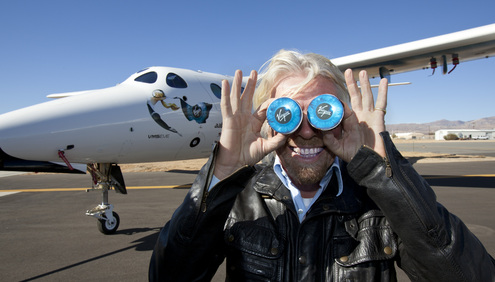 Sir Richard Branson has launched a search for the child who helped spark his dream of building the world’s first commercial spaceline.

In 1988 Richard Branson went on the BBC TV show Going Live. He answered a call from young Shihan Musafer, who asked: “Have you ever thought about going into space?”

Richard replied: “I’d love to go into space, as I think pretty well everybody watching this show would love to go to space. When you see those magnificent pictures in space and the incredible views, I think there could be nothing nicer. So if you’re building a spacecraft I’d love to come with you on it.”

26 years later, Richard has built the world’s first commercial spaceline, Virgin Galactic. Its first spacecraft, “Virgin Spaceship Enterprise”, is nearing the end of its supersonic test flight program and more than 700 Future Astronauts from around the world are booked up and ready to fly. If all goes well, Richard and his children will be on the inaugural commercial spaceflight by the end of this year.

Now, Richard and the Virgin Galactic team are keen to track down Shihan to say a personal thank you for helping to inspire the idea with that phone call.

Richard wants to offer Shihan the chance to join Virgin Galactic as a VIP guest to witness a spaceflight and is calling on the public for their help.

If you think you can help with the mission to find  #shihanmusafer, tweet @richardbranson and @virgingalactic

A video is available to view and embed via the following link: http://youtu.be/RxLNizq-XR8