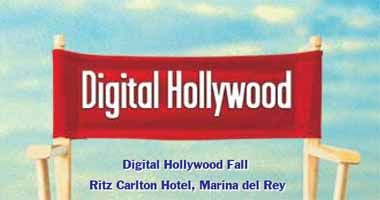 This week The Power Player Lifestyle Magazine is attending Digital Hollywood.  Held at the beautiful Ritz Carlton Hotel in Marina Del Rey, CA, Digital Hollywood brings together entertainment industry professionals, social media aficionados and tech junkies to discuss the evolving nature of the digital entertainment.  This year’s conference will offer attendees its usual array of compelling sessions, screenings, tracks, think tanks and special events, but this year there seems to be a bigger focus on digital’s impact on women.

We are excited to know that this year’s conference will have great emphasis on women in the digital entertainment space. The Women’s Entertainment and Technology Board will offer think tanks, seminars and one-on-ones around the female voice in the industry. Sessions include: “Bringing More Women into Tech” to give insight on on females can break down the barriers into entry into the digital world; “Women in Film” on how digital media shapes the power of the woman in the industry; and “Brand Communication in a Woman’s World”.  There will also be a women’s keynote session moderated by Wenda Harris Millard, president and COO of MedialLink.  Panelist will include Beth-Ann Eason, Senior Vice President, General Manager, Condé Nast; Betsy Morgan, President, The Blaze; Karin Gilford, Senior Vice President, Digital Media, ABC Television Network; and Amy Powell, President, Paramount Digital Entertainment & president, Insurge Pictures.

There also seems to be a great emphasis on digital comedy. The Digital Comedy Summit will be hosted by new media expert and comedic content impressaria Amber J. Lawson.  Highlights of the summit will include “Inside the Comedy Writers’ Room” where entertainment reporter and columnist Leslie Gornstein will moderate a panel discussion that will deliver insights from the frontlines as told by a panel digital comedy wordsmiths. Also, Digital LA founder Kevin Winston will moderate “Crowdfunding Comedy” a seminar on how to use the world’s largest funding platform for creative projects, Kickstarter, to create the next graphic novel, animated movie or comedy blockbuster.

We are also looking forward to the many other summits, events and tracks to take place, many of which include: The Variety Entertainment and Technology Summit, the Digital Hollywood Content Summit, The Think Tanks, Crowdfunding, The Mobile Excellence Awards, The Tablet-Smartphone Summit to name a few.  With so much to going on, we wonder how we are going to be able to squeeze it all in.