Wii Party U – Invite your friends over… it’s time to party! Your living room becomes a party playground as you enjoy time together in comically themed board games and minigames that get everyone off the couch. Every kind of party can be found in this one unique package that takes advantage of your TV, Wii Remote controllers and the Wii U GamePad controller. Also available at retail, Wii Party U will now be available in the Nintendo eShop starting May 16.

Virtual Console on Nintendo 3DS
Mega Man™ IV – It’s Mega May! Every Thursday in May, a different Mega Man game will launch in the Virtual Console section of the Nintendo eShop on Nintendo 3DS. This week’s release is Mega Man IV, which originally launched on the Game Boy system in 1993. Join Mega Man and his friends on another mission to put a stop to Dr. Wily. This time, the mad scientist has used a mind-control machine to reprogram robots from the World Robot Exposition to do his bidding. Blast your way to victory with classic Mega Man game play. Click here to check out the trailer.

Virtual Console on Wii U
Adventures of Lolo – After the love of his life, Lala, is kidnapped by the devilish King Egger and taken to his haunted castle, our hero, Lolo, sets out to rescue her. The journey is perilous, as the Great Devil’s fortress is guarded by a massive army. But Lolo has a few tricks up his sleeve. He can move blocks to trap enemies, clear a path or use as a shield. He can also activate the Magic Shot that will turn enemies into eggs. But watch out, as a single touch from these creatures could spell trouble for our hero. Combining clever environmental puzzles with tricky enemies and an engaging style, Adventures of Lolo is a true NES classic.

Big John Games Sale – For a limited time, Big John Games is discounting select games in the Nintendo eShop on Nintendo 3DS, including Smash Bowling 3D and Big Bass Arcade No Limit. This offer ends at 9 a.m. PT on June 5.

ATLUS Sale – For two weeks, Code of Princess™, Shin Megami Tensei®: Devil Survivor™ Overclocked and more will be at their lowest prices yet! Starting at 9 a.m. PT on May 19 through 9 a.m. PT on June 2, get these cool ATLUS games for $14.99 each in the Nintendo eShop on Nintendo 3DS.

The Nintendo eShop is a cash-based service that features a wide variety of content, including new and classic games, applications and demos. Users can add money to their account balances by using a credit card or purchasing a Nintendo eShop Card at a retail store and entering the code from the card. All funds from one card must be loaded in the Nintendo eShop on either Wii U or the Nintendo 3DS family of systems, but can be used in either Nintendo eShop if the systems are linked to a single Nintendo Network account. 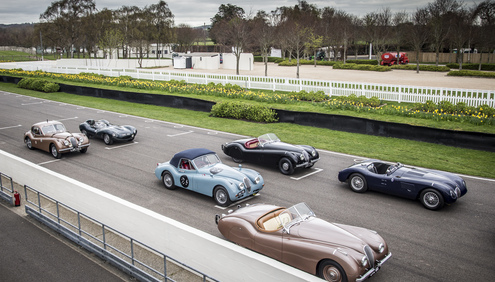 Jaguar Heritage Racing will be tackling the legendary Mille Miglia classic car endurance event from 15-18 May with a line-up...