“Diamonds,” an epic collaboration between Megan Thee Stallion and Normani releases today as the first official single from the groundbreaking soundtrack Birds of Prey: The Album, the star-studded, all-female musical companion to the eagerly awaited new film. “Diamonds” makes history as the first song to interpolate and sample Marilyn Monroe’s iconic “Diamonds Are A Girl’s Best Friend.” The confident, alluring and commanding track is accompanied by an official video incorporating exclusive footage from Birds of Prey (and the Fantabulous Emancipation of One Harley Quinn), streaming now HERE.

Birds of Prey: The Album is now available for pre-order HERE and arrives in stores and at all online retailers on Friday, February 7th in conjunction with the theatrical release of the feature film. The full album includes a tremendous array of powerhouse female artists, including Halsey (“Experiment On Me”), Doja Cat (“Boss Bitch”), Charlotte Lawrence (“Joke’s On You”), and Saweetie & GALXARA (“Sway With Me”). The revolutionary album also features brand new tracks from Summer Walker, Lauren Jauregui and Black Canary, Jurnee Smollett-Bell’s character in the film.

Birds of Prey is one of many new collaborations from Megan, following her appearance on the Queen and Slim soundtrack with single “Ride or Die” and Gucci Mane’s anthemic bop “Big Booty.” Earlier this year, Megan dropped the explosive 300 Entertainment debut Fever, catapulting her to stardom, landing her with #1 songs at urban and rhythmic radio and appearances on NPR Tiny Desk, Jimmy Kimmel Live!, The Tonight Show Starring Jimmy Fallon!, E! News and the BET Hip-Hop Awards, where she took home the prize for Mixtape of the Year, and the MTV VMA’s where she won for Best Power Anthem. She was also awarded with Billboard’s Powerhouse Award at the annual Women in Music celebration. With now over 1B streams across all platforms and her single “Cash Shit’ featuring Da Baby certified platinum, it’s easy to see how the originator of “Hot Girl Summer” is quickly becoming a household name in hip-hop, pop, fashion, entertainment and beyond. 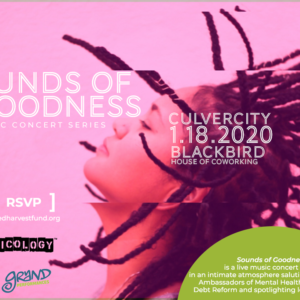 On Saturday, January 18, 2020, Shared Harvest will honor celebrities and community leaders who use their voices for impact...