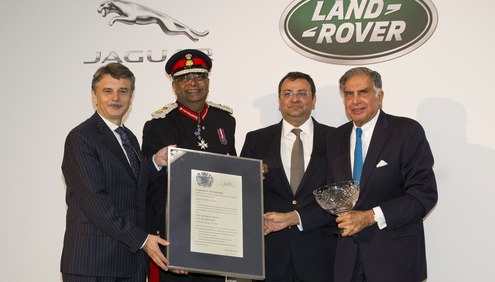 The Queen’s Award is the perfect complement to Jaguar Land Rover being named Responsible Business of the Year 2013, recognising its success internationally as well as the many positive ways the business contributes to society. The business’ outstanding oversees sales growth is reflected in the rise from 274,280 vehicles sold in 2011 to the 425,006 vehicles sold in 2013.

Exports account for more than 80% of all vehicles Jaguar Land Rover produces at its three UK manufacturing plants. The company’s largest export regions are mainland Europe, North America and China, together accounting for 60% of all export sales. Over the last three years, Jaguar Land Rover has created 11,000 new jobs and it is estimated that these will create an additional 24,000 positions in the supply chain

Commenting on the award, Dr. Ralf Speth, Jaguar Land Rover CEO said: “Jaguar Land Rover is delighted and honoured to receive recognition of its contribution to British enterprise and I am privileged to accept this award on behalf of our 30,000 employees. Our success, driven by global exports to over 170 countries, is thanks to our dedicated and passionate employees who create exciting vehicles that are in high demand with customers around the world.

“The Queen’s Award is one of the most important awards for British businesses. We are extremely proud that our positive contribution to society and to the growth of the UK economy has enabled us to achieve this.”