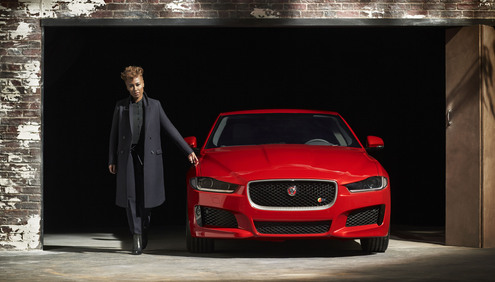 Jaguar today launches FEEL XE, a platform created to harness the spirit of British creativity and innovation using an inspiring collective of figures from the worlds of music, film and design.

Jaguar will be collaborating with artists and personalities including Emeli Sandé, Stella McCartney and Idris Elba to create experiences that express the ‘Exhilaration’ that is at the heart of the XE, the brand’s new mid-sized premium sports saloon.

Multi-platinum, British singer songwriter Emeli Sandé will create the first FEEL XE project. Emeli and Jaguar are looking to the public for inspiration as Emeli begins to write a FEEL XE song about the feeling of Exhilaration to support the reveal of the Jaguar XE. In order to secure inspiration Emeli and Jaguar will ask the public “What makes you feel Exhilarated?”

Using #FEELXE the public can share words, pictures, sounds and films with Emeli through social media (Twitter, Facebook and Instagram) that express what makes them feel Exhilarated. As Exhilaration can mean many different things to many different people, Emeli and Jaguar are expecting a diverse range of submissions.

In reference to her involvement in the project, Emeli said: “I’m excited about working with Jaguar on the FEEL XE campaign and with an incredible British brand. The new XE is innovative in its design and I can’t wait to start collaborating with the world, looking at what defines Exhilaration for them, and premiering the track in London at what is going to be an incredible event!”

Emeli’s FEEL XE track will be performed for the first time at a secret location alongside the Thames on 08 September as part of a spectacular, audio-visual event. The conclusion of this performance will mark the global reveal of Jaguar’s new XE mid-sized premium sports saloon, part of a series of dramatic Jaguar XE stunts and events across the Capital.

The XE is a true sports saloon that has been designed, engineered and manufactured in the UK. With class-leading design and innovation, Jaguar is delivering game-changing driving experience and performance, qualities that FEEL XE will express through creative interpretations of the feeling of Exhilaration.

Emmy nominated British actor Idris Elba will create a FEEL XE project with his production company Green Door Pictures. It will be inspired by his passion for cars and innovation, an interest that he first explored in the recent BBC2 ‘King Of Speed’ series. Idris commented: “I have a passionate, personal connection to cars, and when I think of Exhilaration I am immediately drawn towards the defining points in my life and the role that cars have played in these moments.”

Fiona Pargeter, PR Director for Jaguar Land Rover, commented: “XE is a very special car and we wanted to ensure it had a very special launch. We are very excited to be working with such amazing global talent to create interesting and engaging experiences that we can share around the world. Emeli is an incredible artist and one who embodies the creativity and elegance that is at the heart of the Jaguar brand and the new XE.”

Between now and 08 September the public can see how Emeli Sandé is being inspired by the social media community on Jaguar’s Facebook page (http://www.facebook.com/Jaguar) via exclusive behind-the-scenes footage and interviews. Further FEEL XE projects involving Stella McCartney and Idris Elba will be announced in due course.