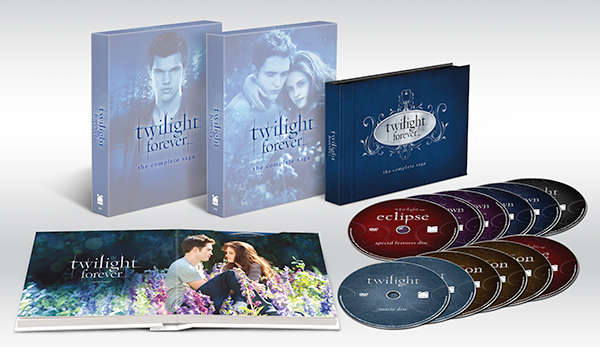 Timed to celebrate the fifth anniversary of The Twilight Saga’s original theatrical debut, fans are invited to relive the immortal love story with Twilight Forever: The Complete Saga, available as a 10-disc Blu-ray (plus Digital HD UltraViolet) set and as a 12-disc DVD (plus Digital UltraViolet) set debuting November 5, 2013 from Summit Entertainment, a LIONSGATE company.  Whether Team Edward or Team Jacob, the passion of Twilight fans hasn’t dissipated with the final film, continuing through fan fiction, pop culture and the constant engagement of over 166 million fans in Twilight’s online network.

Twilight Forever: The Complete Saga encompasses all five films, over 2 hours of brand new exclusive content and over 10 hours of every special feature ever created for the multi-billion dollar franchise. Twilight Forever: The Complete Saga is the ultimate collector’s set, an immersive experience for every Twilight fan to recapture and relive the most epic romance of the century.

The deluxe packaging arrives in a double-sided box that highlights beloved characters, one side featuring Edward and Bella and the other side featuring Jacob; and the discs are held in a commemorative photo album highlighting the most iconic moments from the entire saga.

*A comprehensive listing of special features contained in the Twilight Forever: The Complete Saga set is available.