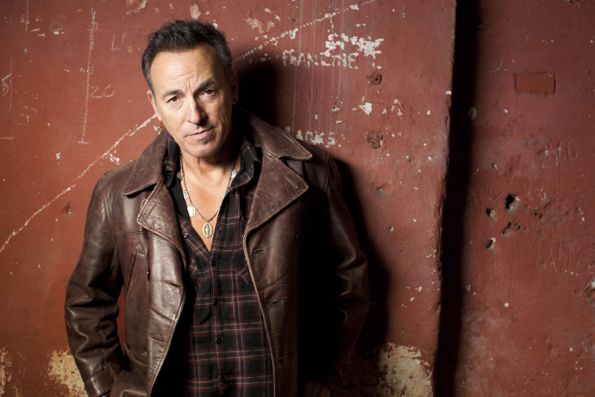 Bruce Springsteen will be honored as the 2013 MusiCares® Person of the Year on Friday, Feb. 8, 2013, it was announced today by Neil Portnow, President/CEO of the MusiCares Foundation® and The Recording Academy®, and Scott Pascucci, Chair of the MusiCares Foundation Board. Proceeds from the 23rd annual benefit gala dinner and concert — to be held in Los Angeles during GRAMMY® Week two days prior to the 55th Annual GRAMMY Awards® — will provide essential support for MusiCares (www.musicares.org), which ensures that music people have a place to turn in times of financial, medical, and personal need. Arranger/composer and nationally renowned music producer Rob Mathes will be the evening’s musical director.

Springsteen is being honored as the 2013 MusiCares Person of the Year in recognition of his extraordinary creative accomplishments as well as his significant charitable work, which has included an impressive range of philanthropic activities over the years.

“Bruce Springsteen is a truly gifted and Renaissance artist of our time, a national treasure, and an exemplary humanitarian,” said Portnow. “His career is a testament to the power of creative excellence, and his contributions as a philanthropist speak to the tenacity of the human spirit. We are privileged and honored to pay tribute to Bruce this year as our MusiCares Person of the Year.”

“Bruce is synonymous with artistic independence and a passion for causes that are close to his heart,” said Pascucci. “His career seamlessly combines inspiration and charity, and it’s a reminder that we can all do our part to make the world a better place.”

The 2013 MusiCares Person of the Year gala will begin with a reception and silent auction offering an exclusive and unparalleled selection of luxury items, VIP experiences and one-of-a-kind celebrity memorabilia for bidding guests. The reception and silent auction will be followed by a dinner, the award presentation and a star-studded tribute concert. The MusiCares Person of the Year tribute ceremony is one of the most prestigious events held during GRAMMY Week. The celebration culminates with the 55th Annual GRAMMY Awards at STAPLES Center on Sunday, Feb. 10, 2013. The telecast will be broadcast live on the CBS Television Network at 8 p.m. ET/PT.

Springsteen’s recording career spans nearly 40 years, beginning with his 1973 Columbia Records release Greetings From Asbury Park, N.J. By 1975, the covers of both Time and Newsweek declared Springsteen’s music a national phenomenon. He has released 17 studio albums, garnered 20 GRAMMY Awards and won an Oscar (for “Streets Of Philadelphia” from 1993’s Philadelphia). He was inducted into the Rock and Roll Hall of Fame, and in 2009 he was a recipient of the Kennedy Center Honors. His albums Born To Run and Born In The U.S.A. have been inducted into the GRAMMY Hall Of Fame®. Springsteen’s latest album, Wrecking Ball, was released in March. Springsteen has supported a wide range of charitable causes including organizations that work to alleviate homelessness and hunger.

including emergency financial assistance for basic living expenses such as rent, utilities and car payments; medical expenses including doctor, dentist and hospital bills; psychotherapy; and treatment for HIV/AIDS, Parkinson’s disease, Alzheimer’s disease, hepatitis C, and other critical illnesses. MusiCares offers nationwide educational workshops covering a variety of subjects, including financial, legal, medical, and substance abuse issues, and programs in collaboration with healthcare professionals that provide services such as flu shots, hearing tests, and medical/dental screenings. The MusiCares MAP Fund® allows access to addiction recovery treatment and sober living resources for members of the music community. Staffed by qualified chemical dependency and intervention specialists, MusiCares Safe Harbor Rooms, supported by the Bohemian Foundation, offer a support network to those in recovery while they are participating in the production of televised music shows and other major music events. MusiCares holds weekly addiction support groups for people to discuss how to best cope with the issues surrounding the recovery process. The MusiCares Sober Touring Network is a database of individuals across the United States who can take music people to recovery support meetings while on the road.

Established in 1989 by The Recording Academy, MusiCares provides a safety net of critical assistance for music people in times of need. MusiCares’ services and resources cover a wide range of financial, medical and personal emergencies, and each case is treated with integrity and confidentiality. MusiCares also focuses the resources and attention of the music industry on human service issues that directly impact the health and welfare of the music community. For more information, please visit www.musicares.org. For breaking news and exclusive content, please like “MusiCares” on Facebook at www.facebook.com/musicares and follow @MusiCares on Twitter at www.twitter.com/musicares.

Established in 1957, The Recording Academy is an organization of musicians, producers, engineers and recording professionals that is dedicated to improving the cultural condition and quality of life for music and its makers. Internationally known for the GRAMMY Awards — the preeminent peer-recognized award for musical excellence and the most credible brand in music — The Recording Academy is responsible for groundbreaking professional development, cultural enrichment, advocacy, education and human services programs. The Academy continues to focus on its mission of recognizing musical excellence, advocating for the well-being of music makers and ensuring music remains an indelible part of our culture. For more information about The Academy, please visit www.grammy.com. For breaking news and exclusive content, follow @TheGRAMMYs on Twitter, like “The GRAMMYs” on Facebook, and join The GRAMMYs’ social communities on YouTube, Tumblr, Foursquare, GetGlue, and Instagram.